Sine Qua Non’s Digital Executive Rob Horne gives his view on the year ahead in technology. Tweet us your opinions @TechandSport on what you’ll add to your digital arsenal in 2015. 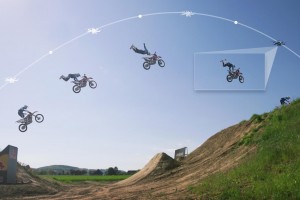 This year is the year of having your tech and wearing it too. Wearable tech is becoming more and more durable and subsequently, people are open to the idea of not needing to take out a mobile phone to keep up-to-date on breaking news, just how many steps taken since you left the house or what interesting image Joe has posted on Instagram.

But, wearable tech is going to a new level. It’s not just a wristband now; it’s a backpack to charge other portable devices. The smart bag and others like it, developed by AMPL Labs, means you can carry your wearable and portable devices and then wear them and use them that little bit longer. The bag is equipped with an 18.5-Wh lithium-polymer battery hooked up to seven USB ports. A potentially extremely useful tool for location photography and videography shoots. Speaking for every videographer out there, a portable charging device that also protects gear during transporting would be very useful indeed.

One product that took off in 2014 and I predict will become even more popular and longer this year, is the selfie stick. It could be considered a great tool, however in terms of professional photography and videography, a good tripod or monopod and a remote timer can never be replaced. This leaves the selfie stick as a gimmick that is great for holiday shots in front of famous landmarks.

Drones, often criticised as being annoying and dangerous, do hold a clear place in videography, especially in sports. They can give an extremely professional feel to any low budget short film too. However there has to be a valid professional use for them and they must be used in a contained environment. Revealed at this year’s CES in Las Vegas were two new autonomous drones, the Air Dog (that follows a wearable piece of wrist tech) and the Hexo+ that follows an extensive APP compatible with iOS operating systems. The Hexo+ is where drone developers should be aiming as it offers the use of highly professional shots (automatically) rather than having to employ a full dolly, jib, crane and video production crew. Both of these drones use a Go-Pro stabilised mount. With more brands no doubt launching action cameras, drones will become compatible for mounting other cameras.

Another piece of tech that will see steady increase in use, more so by businesses, engineers and possibly even the NHS and surgeons, will be 3D printing. Here at Sine Qua Non, we have seen how one of our clients Toyota Motorsport uses 3D printing to help with the dentistry industry. Recently in the UK, a 3D print of a gentleman’s kidney was used to help surgeons operate on him. As the price of 3D printing drops, it’s likely to be used more and more to equip surgeons and other health professionals in their jobs.

For years we have used Facebook to post images, status updates and videos, but many favoured the convenience of YouTube for hosting videos in particular. Now, with so much more video integrated into the platform, the collective videos views have actually just overtaken those of YouTube. In September, Facebook announced it was generating more than a billion video views daily. The steep climb in Facebook’s video numbers is the result of the site adjusting its newsfeed algorithm in June, serving up more relevant video content to users that were more likely to watch a video. Also with Facebook’s “auto-play” I would argue that although Facebook’s views may have grown, actual viewer engagement is nowhere near as strong as it is for Youtube and Vimeo. Whether this means for video marketing campaigns in the future should be uploaded straight to Facebook, it’s too early to tell. Vimeo is better suited to “professional uploads” however YouTube offers a similar hosting experience at no extra charge to upload several high definition videos at one given time. In 2015 YouTube may have to compete a bit harder with Facebook for those all important views, but it could see exciting developments coming out of the ever-growing video sharing site.

Speaking of developments for the future, products like the kid’s computer Leaptop, developed by LeapFrog, are a step forward in the right direction for getting children engaged with technology. Many would argue that is far more beneficial for a child to play outside or with toys than with a computer, but only to a certain extent. As long as the products are designed with education in mind, they can help with children’s cognitive development and using computers at a young age will help when they come to use personal computers in the future. These skills will be just as useful as outdoor play and free time to be creative with their imaginations, it will help the next wave of creative minds use technology alongside their imaginations with more than likely some extremely impressive results.

Back to the future now and a quick comment on how we might be one step closer to the hoverboard desperately craved from the popular film series. Although the Hendo hoverboard isn’t quite there yet, it could lead to some developments in transportation and offer interesting new video techniques and angles. Using a complex degree of magnets allows it to hover an inch above the ground and can be propelled forward using four small engines. While the project is in early stages and has obvious limitations at this point, it may become something more in years to come.

Lastly, another technology to watch in 2015 and into the future is virtual reality (VR). It is safe to say that Facebook are really “buying into” the idea having purchased virtual reality giant Oculus for $2bn. It’s already clear this is technology not just limited to the game world, as Oculus’s CEO says. He thinks the future of VR could even include face-to-face interaction worldwide. Virtual reality has the ability to offer some extremely cool new developments in theme parks as well as marketing and the gaming industry. It could also help with global business meetings too. Skype and FaceTime are great for long distance meetings but VR could be key to breaking the final barriers of working remotely.

With the end of January approaching fast, there’s already plenty to be excited about happening in 2015. As trends develop, the SQN team keeps a keen eye on the best way to incorporate the latest technology into proven PR, marketing and sponsorship activation campaigns for our clients.