Take to the court at Wimbledon in one week’s time and you might be surprised by the lack of visible sponsor logos. Or then again, you may not notice the refreshing absence at all. Whichever way you look at it, one of the most-watched sporting events in the world actually boasts some of the longest standing sporting sponsorship partnerships in the business.

The first lesson to come from this is that some of the best sponsorships are not focussed on branding. Technology giant IBM celebrates 25 years with Wimbledon this year when Andy Murray once again tries to make the British crowds proud. Little known as well is Robinsons’ 80-year tenure as official soft drink of one quarter of the Grand Slam challenge.

Slazenger’s branding is arguably the smallest (in size) of them all, as well as the longest running partnership in sporting goods history, as they take their place on court as Official Ball Supplier. Since 1902, the leaping cat has flown across the net between duelling tennis greats at Wimbledon. 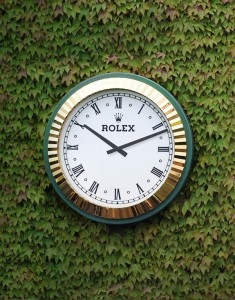 Rolex, the only Wimbledon sponsor with a prominent on court presence, dates back to 1978 and in its current form displayed within the traditional polished glamour of the courts. The Official Timekeeper of Wimbledon fixes a simple Rolex clock face to the recognisably vined wall as well as branding on each court’s scoreboards. The watchmaker holds the most traditional branding-style form of sponsorship of the event.

Behind the scenes, the green scoreboards are powered, and their data distributed and analysed by little-seen IBM, which has a 50-year history of extending its technology infrastructure solutions into professional sports including tennis’ other Grand Slam events US Open, Australian Open, as well as the United States Golf Association US Open, NFL and more.

With extensive tools and capability in managing large volumes of data, and its long track record in tennis, IBM is demonstrating the holy grail of ‘big data’, turning data into insight (see our recent blog post on data mining in social media). To size it up, collecting data from the 254 singles matches of each two-week tournament provides 3.2 million data points. After eight years at all four Grand Slam tournaments, fans now benefit from player performance analytics and enjoy statistic predictions for KPIs and outcomes for upcoming matches.

These insights mean IBM is not only able to predict percentage likelihoods for match outcomes, it can also indicate what elements of play are key for an athlete’s win in each final. For example, in 2013 Andy Murray needed to win more than 57% of second serve return points and managed 59% on his way to victory. This data-driven predictive technology was carried over into the 2014 Wimbledon Championship. 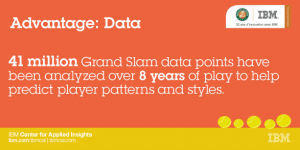 This year, the IBM SlamTracker app with its Keys to the Match feature is available to everyone with real time statistics and predictive analysis: including aces, serve speed and much more. Commentators and other Wimbledon officials will be able to query computers running IBM Watson, a powerful cognitive processing programme, to be able to share with the world more detailed insights than ever before.

Over 25 years of sponsorship, IBM has continually adapted its sponsorship activation in order to keep relevant in the context of the sport and the business of its customers. As computing power has evolved, the tech company has developed ways of utilising it. In 2015, despite limited on court branding, IBM will be in the palm of tennis fans’ hands for each match.

Remember sponsorship comes in different shapes and sizes. It’s a case of identifying opportunities to tell your brand’s story in the right context. Get that right, and you can work towards the same kind of long term value generation as IBM and Wimbledon’s other sponsors.