SQN Blog-vent Calendar: 21. Can Too Many Races Spoil A Season?

This year saw the longest Formula One season ever in terms of the number of races that took place over the course of the campaign: 21. 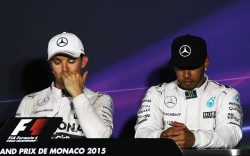 For many this can surely only be seen as a good thing. More races means even more action for millions of fans across the world, with a packed schedule ensuring that as many of them as possible can have the chance to catch a glimpse of their heroes during their season-long tour across five continents.

So why then will next year’s tally drop to 20 races again?

Officially, the dropping of the German Grand Prix was put d

own to commercial reasons. But could we read more into the FIA’s decision to downsize? Could it be more of a case of simply too many races? In packing in 21 races across just 36 weeks, is the current format bordering on overkill for the teams and fans alike?

One indicator of support for this hypothesis can be found when examining the UK television ratings for this season’s Grand Prix. TV viewing figures for Formula One are falling – and falling consistently. Take this year’s US Grand Prix as a case in point. In previous years, North American Grands Prix have pulled in average audiences of around 4-5 million in this country. This year Sky Sports and Chan

nel 4’s combined overnight average came in at just 1.83 million. This marked the lowest overnight viewing average for a race since the 2006 French Grand Prix.

Obviously, the world of sports consumption is dramatically changing as mobile viewing, which is not included in overnight figures, continues to grow exponentially. This, along with the rise of illegal streaming and even the argument amongst many that Formula One just isn’t as exciting anymore due to the domination of certain teams such as Mercedes this year, could also explain the falling TV numbers.

However Formula One is not alone in its struggle, with perhaps football serving as the highest profile example of another sport falling in the ratings. J

ust like Formula One, there has never been so much televised football content, with BT Sport and Sky Sports broadcasting 194 live Premier League games this season – that’s just over half of the 380 games that are scheduled to take place. Like Formula One though, they have seen viewing figures for their live offerings tumble, with recent reports showing Sky Sports in particular suffering from a 19% audience decline since last season.

Is the seemingly ubiquitous nature of these sports in fact doing them more damage than good? Both Formula One and the Premier League are marketed as the most exciting and unpredictable competitions in their respective fields. But when you start to see them more and more often, to the point where they feel almost ever-present, do they start to lose a certain sparkle? That elusive charm that made previous seasons of Formula One and weekly editions of Match of the Day such big ratings winners?

Undoubtedly there are other factors that can be used to explain the declining viewing figures of both sports, as have already been made clear earlier in this blog. However, could it be worth these large sporting bodies possibly taking a step back and reviewing the way in which they organise their competitions and distribute rights?

It goes without saying that the more races there are, the more money that Formula One can generate, both on the ground at the circuit, as well as through broadcasting and its subsequent advertising and sponsorship opportunities. However if current audience engagement is anything to go by, reducing the number of races may seem like a difficult step to take at the moment, but could prove to be a prudent one in the future battle to win back television audiences.