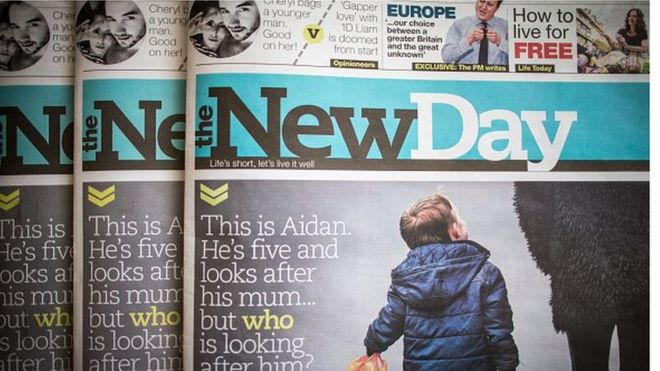 This year, Leap Day was not the only significant event to occur on the date of February 29th. As editions of the New Day hit the newsstands that morning, it also marked the launch of the first new daily newspaper since the i in 2010 and the first standalone title since the Independent made its debut in 1986. In a twist of irony, the Independent itself would cease its printed edition just weeks after the dawn of the New Day…

Looking to try and target an audience of ‘those who don’t usually read newspapers’, the New Day wished to establish its place in the crowded daily newspaper market as a publication that focused more on the positive and relatable stories in the news. To quote an original press release, it wished to ‘report with an upbeat, optimistic approach’ and would be ‘politically neutral’. Designed as a tonic to all those who had supposedly fallen out of love with a sensationalist and partisan written press, Editor-in-chief Alison Williams herself stated that ‘we threw out all previous thinking’ when setting up the new publication.

Yet just 9 weeks after its launch, and off the back of a huge £5 million TV advertising campaign, the New Day presses stopped rolling. The target of estimated paid sales of 200,000 per day was never met. Instead, by the time of its closure, the New Day was just scraping sales of 30,000 copies per day. So what went wrong? And what can we in the world of communications learn from this grand experiment?

Can the demise of the New Day be read as the demise of print media in general? Or at least certainly the demise of new publications? Given current digital trends, and an increasingly online based media, was a print newspaper with no accompanying website ever a feasible option?

One only needs to look at the market, and in particular, the most recent new daily newspaper prior to the New Day to know that this is not the case. The i was launched six years ago and continues to flourish today. Billed as an alternative for Independent readers who wanted a more condensed and easier to read newspaper whilst on-the-go, the editors successfully found its target market. Readership has since remained consistent and in 2015, it was even named the National Newspaper of the Year.

This progress may have been helped by the fact that unlike the New Day, the market targeted was people who still actually read newspapers – but perhaps just wanted to read another newspaper that was a little bit different to what they were used to.

Here lies the error in the strategy of the New Day. To be successful you need to know what it is that your audience wants. If your audience is ‘people who don’t usually buy newspapers’, and you are planning to launch a successful newspaper, how is it that you will ever be able to fully understand and sustain your audience’s wants and needs? Especially in such a financially strapped and thus unforgiving industry?

Given more time maybe the New Day would have been able to discover this audience. But its brief spell on the newsstands serves to us all in the world of communications the reminder that in order to succeed, very little is more important than knowing and fully understanding your market. It really can be the difference between making sure you and any of your clients stay on the front page, and don’t just become tomorrow’s fish and chips paper.