We are delighted to see the launch this week of a brand new digital campaign from Toyota Motorsport GmbH (TMG), #ThisIsEngineering, aimed at sharing the company’s passion for engineering. 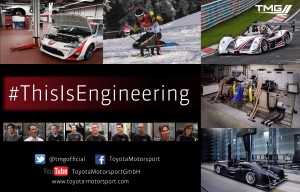 #ThisIsEngineering reveals the personal story behind selected members of the company’s skilled workforce, while showcasing the passion and dedication to engineering which TMG’s team members put into each and every project, from works motorsport to customer projects.

Sine Qua Non has worked closely with TMG’s communications team to develop the concept, which is the first bespoke digital campaign undertaken by TMG. From interviewing the selected interviewees at TMG’s state-of-the-art ‘Home of High Performance’ in Cologne, Germany, to editing of each of the short clip, SQN’s digital team has been involved at every step of the way.

Some of the feedback so far:

“We absolutely love this idea and look forward to each new instalment.”

“This is a great insight”

“This is a great idea for the whole series like this. I really like interviews with LMP team some time ago, mostly like articles and another stories.”

“This is an awesome campaign.”

The sports sponsorship sector has had a tough time of late. The overhanging impact of COVID-19, the impending betting sponsorship ban, and now the call for high-carbon sponsorship deals to be dropped. It’s a challenging period to say the least. Earlier this week a report published by the New Weather Institute think tank, climate charity […]

Following last week’s announcement of Manchester United’s new shirt partner, SQN CEO Claire Ritchie-Tomkins offered her thoughts on the big money investment: A recent whitepaper I read by B2B Institute on LinkedIn about B2B trends for the next decade concluded by saying that brands should ‘play big or go home’ and that is exactly what […]

How much do you know about the online used car industry? Perhaps if you’ve bought or sold a vehicle in recent years then you may be reasonably clued up as to the size of it. If not, then you may be surprised to know that the global industry is expected to be worth a staggering […]

Motorsport sponsorship – thinking outside the box

A frequent theme from today’s Autosport International Connect (#ASIConnect) centred on sponsorship and the challenges faced by sponsors during the pandemic, with the well-documented restrictions on at-circuit fan and guest attendance. Let’s get this clear from the outset: sponsorship is so much more than a logo on a car, or guests in a hospitality unit. […]

Motorsport sponsorship – thinking outside the box