Takeaways is a new feature of the SQN blog where one of the team talks about what they learned at a recent event, be it motorsport, technology or something else altogether.

PR and Marketing Executive Sarah Byles ventured to Northern Ireland last weekend for the Vauxhall North West 200. It was her first spectating experience of a motorcycle road race and here is what she learned:

Despite battling a serious dose of woman flu, I managed to make it up to Belfast and on to Northern Ireland for the North West 200. It’s a brilliant event that combines the thrill of circuit racing with the accessibility of rallying, topped off with a motorshow’s on-ground culture.

Accessibility – Perhaps it goes without saying, but an event that attracts motorbike enthusiasts sees a majority of its visitors using bikes as transport. With bikes taking up less space, parking became much easier for those lumbering around in a giant camper. 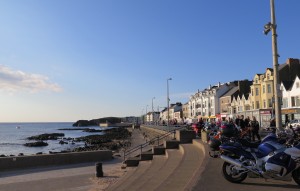 Show – These aforementioned enthusiasts take real pride in their machines and all along the Portstewart promenade, their bikes were lined up for people to look at. The bikes on the sidewalk are almost as much of a draw as the actual race bikes and the breadth of style covered pretty much anything you could imagine: café racers, sports bikes, naked bikes, trikes, supermotos and choppers – you name it, it was there.

Sponsorship – Vauxhall doesn’t make much sense as a motorcycle road race title sponsor, at least not to start with, in an event where most marshals, medics and support personnel use bikes for the fastest incident response times. But Vauxhall is a huge automotive brand in Northern Ireland and the four-wheel support vehicles that were used were all by the manufacturer. 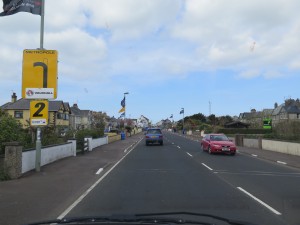 Speed – The circuit, also known as the Triangle, is 8.970 mi (14.436 km) in length. We drove it on Thursday afternoon in the camper, recording a lap of around 35 minutes (with traffic!). The fastest qualifying lap was recorded in 2014 by Michael Dunlop on a BMW Superbike: 4 minutes 24.095 seconds with an average speed of 122.274 mph. In the Cromore to Black Bridge section of the track, riders are absolutely flat out. They hit top speeds of over 200mph (320kph) on straights with no run off whatsoever. It’s difficult to follow with the naked eye.

Respect – Ireland respect their heroes and everyone is acutely aware of the inherent dangers of road racing. The Dunlop Memorial Garden in Ballymoney pays homage to Joey and Robert Dunlop’s celebrated careers and was well-traipsed during the NW200 week. Visitors from all over took a moment to appreciate what these two had achieved in their careers, which includes 28 NW200 victories between them.

We’re very lucky to have such a range of events available to explore within Europe, and I look forward to seeing much more road racing – including the TT – in the future. Since passing my motorcycle licence last year and getting out on the road myself, I have also gained the utmost respect for what these guys do.

Sarah Byles is a 26-year-old New Zealander and latent motorbike enthusiast obsessed with good coffee. Follow her on Twitter @sarahbyles.